I’ve been working on an application for a while. There are a bunch more things I want to add to it, but I decided to bite the bullet and release it.

Basically, I’m shooting for an Evite that doesn’t suck. Check it out at EasilyInvited.com

Below is the first post to the EasilyInvited Blog. If you get a chance, check it out.

I love getting invited to parties. I really love that my friends still invite me to parties even though I’m such a nerd. But, boy do I hate getting evites. Their site is ugly as sin and overflowing with advertising. When you get an email invitation they don’t even have the decency to tell you when and where the party is. You have to go to their site and sit through an ad. It’s clear that every decision they make is for the benefit of advertisers and not users.

Other people noticed this too. I’ve heard friends complain about Evite repeatedly.

So what are your options?

You could organize your events with GMail, or Facebook, or even Outlook if you’re organizing a work event. And those work great if everyone you’re inviting uses them. Unfortunately, while it seems like everyone in the world is on facebook there are still quite a few people, particularly those 25 and up, who aren’t. So that doesn’t really work.

A bunch of companies have tried to build an “evite killer.” The problem is that they’ve all tried to do something different. Either they try to get into the process earlier (get together next week becomes dinner Wednesday, becomes Dinner at The Front Page at 8PM on Wednesday, August 1) or they add features that I doubt anyone uses (Organize your event with text messages!!!)

I think they add features and complexity because “Evite sucks” is a pretty lousy pitch to a Venture Capital firm. Thankfully, I’m not pitching VC’s.

I think that the simple act of sending out invitations and tracking responses is a pretty darn good sweet spot for an application. I also think that the existing implementations are lacking. 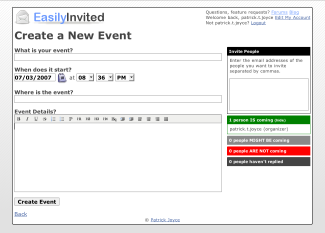 EasilyInvited is my attempt to make a simple web site that handles sending invitations and tracking the response. Over time I will be adding features the site, but my main goal will always be to keep the application simple.

Sign up for an account now and create your first event. I hope you like it. And if you don’t I provide a 100% money back guarantee. (Of course the application is free, so you won’t really get much back ;) )