Over the last few weeks I’ve spent a little time at night redesigning this site.

I’m quite pleased with the outcome and even more impressed with the improvements in front-end development tooling since I last implemented a design from scratch.1 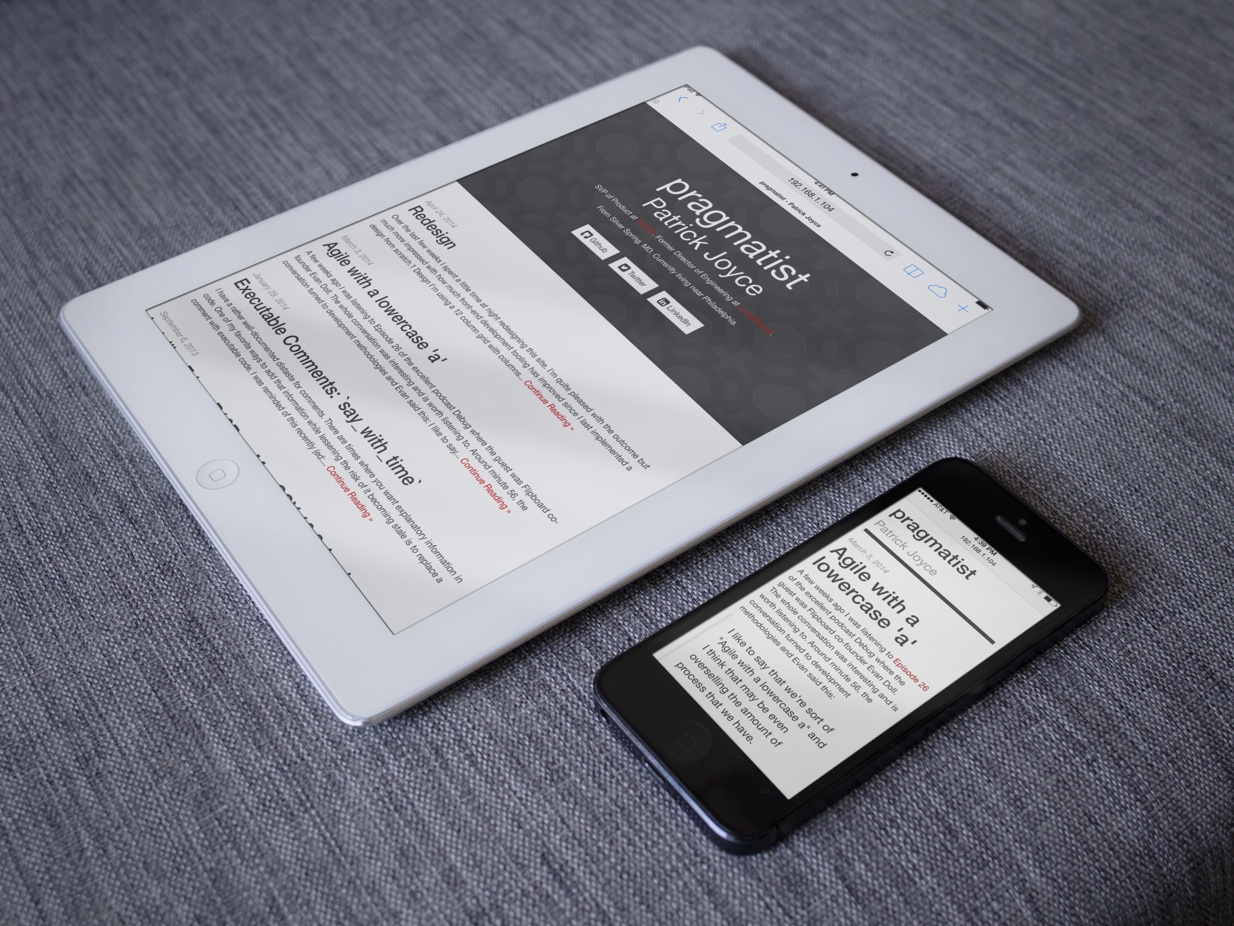 Design is about making decisions in service of a goal. For this design I had a few goals:

The cover image on the homepage is a masked version of a photo I took of the ceiling at the Plaza de España2 in Sevilla.

The site is set in Gotham. I’ve been enamored with Gotham for some time and am pleased with how it looks on the web (particularly on retina screens)

Icons are implemented using Font Awesome, which is in fact awesome.

Notes are styled as side-notes on desktop3 and end-notes on phone and tablet sizes. 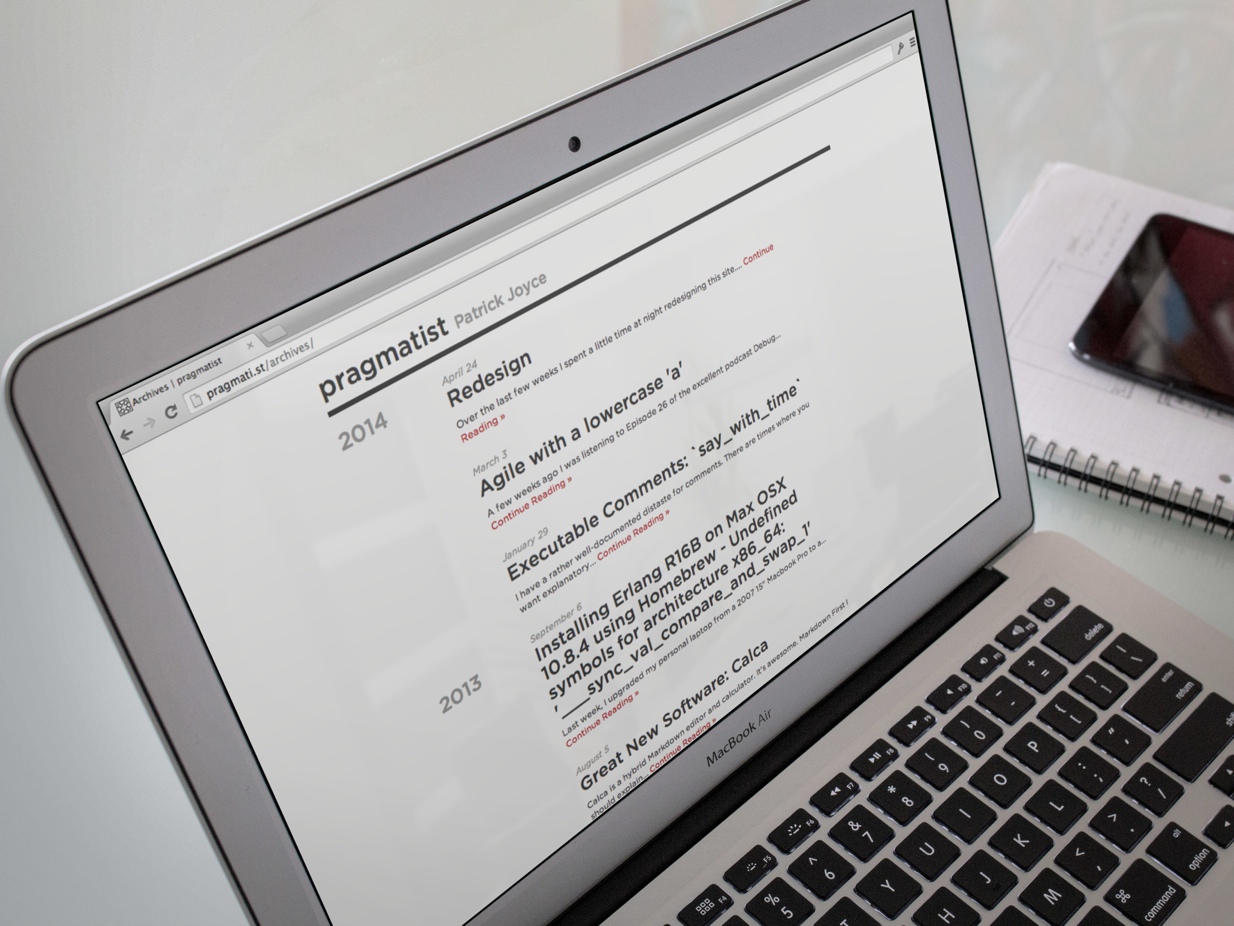 Redesigning my personal site served as a good excuse to learn some new tools. This site is built using the following tools.

You’re reading static HTML generated with Jekyll. I previously used Octopress which wraps Jekyll with some additional tooling and includes a few additional plugins which are nice.

In this revision I switched to plain Jekyll because Octopress hasn’t been updated in some time and Jekyll gave me everything I wanted.

I liked Bootstrap 2. We built an internal CSS library at LivingSocial based on it that greatly improved the speed and consistency of our front-end development.

That said, the maintenance concerns around Bootstrap 2 were completely valid. It was difficult to keep up to date once you began customizing it. The grid system did introduce a ton of extra <div class="col-md-3"> noise in your markup.

Bootstrap 3 (and LESS) solves both of those problems. Customizations can be made easily by overriding a few variables and you can use mixins for the grid system without polluting your markup with non-semantic tags.

I am by no means a designer. Starting with a blank canvas is overwhelming. Bootstrap gives me a well-thought out type scale, spacing scale, and grid. I can then make a few customizations and end up with a clean, consistent design.4

CSS preprocessors are a massive improvement over writing plain CSS.

I touched on the benefits of using LESS with Bootstrap above. LESS itself makes writing CSS much simpler.

I’ll admit I worked through most of the design of this site using plain CSS. Then I added the tooling to compile LESS and reworked my stylesheets to LESS. I wish I hadn’t waited so long.

The last time I was doing serious front-end development browsers didn’t yet widely support web fonts and foundries weren’t licensing fonts for the web. So when our designer fell in love with Rockwell for headers we didn’t have a lot of good options.

I still have flashbacks about the many, many hours of my life I lost cutting images of text.

Browser support has now advanced enough that using custom fonts is easy. To use Gotham I signed up for an account at cloud typography. I included one stylesheet in my markup:

and overrode two variables in my LESS stylesheets:

and now my site is set in a lovely face.

Bower is a package manager for front end assets from Twitter.

Package management beats the hell out of manually managing dependencies. Previously I’d use rubygems to manage front-end assets, but as my former colleague Dave Copeland points out it is sort of insane that “Rails 4.0.4 depends on version 2.2.x of the jquery-rails gem which in turn bundles 1.9.1 of JQuery.”

Bower removes that level of indirection. Suffice it to say, I’m never going to use rubygems to manage front-end assets again.

Grunt is a task runner for JS. To generate the stylesheets from less I run:

Of all the new tools I used on this project this is the one I’m least convinced of. I prefer Ruby over JavaScript so might move back to Rake.

My job is no longer to build things directly. I spend my days building teams that build products and I love my job.

But it was a refreshing change of pace to build something entirely by myself, for myself. I enjoyed it immensely and hope that the improved site design will prompt me to write more.