A Brief Morality Play About A Cool, User Friendly Feature

I saw a feature request from my friend and former colleague Ellen Beldner last night on Twitter:

What follows is a running diary of my thoughts for the next five minutes where I:

0m:01s — That sounds amazing! I hate when the password 1Password generates is rejected. How would I implement that?

0:10 — Wait, doesn’t HTML5 have support for client side validation built in? Wouldn’t that cover it? I bet I could figure out how to make this work and impress my friend.

00:30 — It does! There isn’t a full protocol, but HTML5 allows for specifying regex patterns that an input is required to match. There’s even a w3schools tutorial on how to set up regex validation for a password field complete with an example:

0:35 — OK, so I’ve got a regex, what would do I need to know to make sure that my generated password matches? 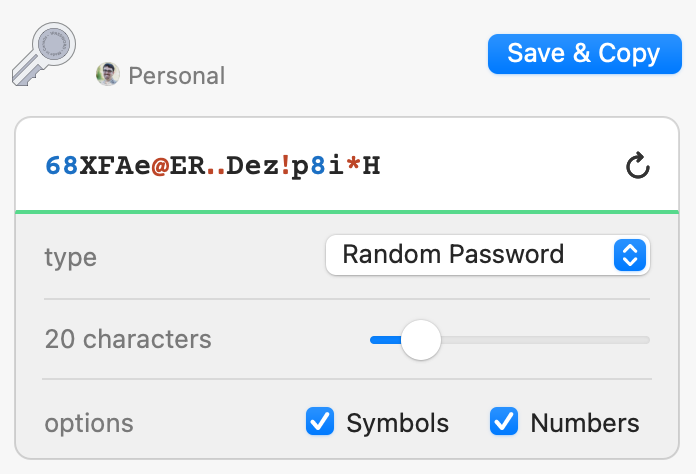 1:30 — So… how do you extract that information from an arbitrary regex. Well, I’m sure that there are smart ways to do this, probably something with an AST of the regex?

2:15 — But “perfect is the enemy of the good” and I can already think of two pretty dumb ways to do this so I don’t need to use my CS degree today:

2:45 — Alright… I feel like we’re getting somewhere! That may be a dumb, inefficient implementation but I bet it would work for 99% of cases.

2:46 — But… if I can figure out how to make this work in 5 minutes of thinking, wouldn’t the people who spend their whole working lives thinking about password managers have thought of this? I’m sure they dogfood their products and they have to be extra annoyed every time a site rejects their password…

3:00 — I have a feeling that the sites with annoying password requirements that reject strong passwords aren’t implementing a ton of the newest HTML5 stuff.

3:01 — How can I test that hunch? I’ve had autogenerated passwords rejected, but I don’t remember where off the top of my head.

3:30 — Thankfully everything exists on the Internet! A quick search for “sites with dumb password requirements” brings me to Dumb Password Rules on GitHub.

3:45 — And… I have accounts with a couple of these sites so let’s check and see if they look like they’re implementing anything modern like HTML5 form hints.

5:00 — OK… so this feature could totally exist! But only if sites with annoying password requirements added something to their HTML. And if I worked on a password manager I wouldn’t build this feature, because I doubt it would meaningfully reduce how many autogenerated passwords get rejected in real world usage. What we have is a problem of adverse selection:

And thus I conclude this edition of “Patrick gets excited about a feature idea, figures out how it could work, and then crushes his own dreams in 5 minutes.”

I wish I had a more useful lesson here. Maybe some form of Chesterton’s Fence like “If you have an idea for an obvious feature in someone else’s product, ask yourself why they haven’t built it before you propose it”

But I don’t think that is particularly useful.

Because you don’t get any credit for calling that something will fail. The default is that things don’t work.

So I’ve spent the last decade training myself to look for “how could it work?” and “how much would it matter if it did?”